In the summer of 1967 Janice MacDonald and her mother Joyce jumped into their Plymouth Barracuda and drove across Canada to celebrate Canada’s 100th birthday and Expo in Montreal. Fifty years later she recreated the road trip with her husband to experience the same magic that defined her childhood.

Janice MacDonald’s Confederation Drive looks at how Expo was Canada’s coming out party to the rest of the world and how we are seen by the global community fifty years later. It’s a love letter to her beloved mother. It’s lobster dinners and Anne of Green Gables and Saskatchewan rest stops and Manitoba detours.

In the year of Canada’s 150th birthday, there is no more Canadian thing to do than curl up with this book and reflect on where we’ve been as a country and, more importantly, where we’re going.

“Confederation Drive  isn’t really a book about Canada 150, although the timing was nice. It’s about what the 50 years since the Expo has meant to Canada and whether the promise that was ignited in 1967 has been lived up to.”
—Mike Ross, Gig City Edmonton

“Part meditation and part travel memoir, Confederation Drive  is a wholly charming cross-country adventure that explores themes of connection. As might be expected from one of Edmonton’s foremost detective writers, Janice MacDonald also seeks to unravel the mystery of how a childhood road trip in honour of Expo ‘67 shaped her identity. With musings on motherhood, culture and politics and a requisite number of traffic mishaps and lobster dinners, MacDonald brings back the great Canadian road trip in time for Canada’s biggest birthday yet.”
—Ali Bryan, author of Roost

“Mystery writer Janice MacDonald has embarked on a mystery of her own – to recapture the magic she experienced as a child on a road trip with her mother, east to Expo ’67 and beyond. Janice and her husband Randy are congenial travelling companions and the book flies by like the kilometers outside the window. A great way to celebrate Canada’s 150th Birthday!”
—Rita Donovan, author of Daisy Circus

“Confederation Drive  is a palimpsest that traces over 1967’s highways and revisits its pitstops in a return trip to mark Canada’s 150th year. This diary-like memoir is more than a record of a road trip across the Canadian provinces and a mediation on what the sesquicentennial represents, but it is also a movement across time that allows a daughter to remember her mother and the lines—like those on a map—that connect them.”
—Jessica Kluthe, author of Rosina, the Midwife

“This memoir is more than just a road-trip story—it’s a touching account of one daughter’s journey to reconnect with her mother. While meditating on her mother’s influences on her life, MacDonald will also bring out the patriot in any Canadian. You’ll find no better travel companion and may discover some new facts about our sprawling country—along with many laughs—as you read this epic tribute to a cherished mother and home.”
—Where Edmonton Magazine 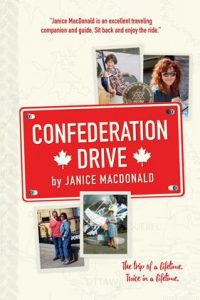