Hang Down Your Head

Some folks have a talent for finding trouble, no matter how good they try to be, especially Randy Craig. Maybe she shouldn’t date a cop. Maybe she should have turned down the job at the University of Alberta’s Folkways Collection library — a dream job that becomes a nightmare when a rich benefactor’s belligerent heir turns up dead.

Randy tried to be good — honest! — but now she’s a prime suspect with a motive and no alibi in sight.

Praise for Hang Down Your Head

“Join folk music maven and Edmonton original Randy Craig for a roller coaster read with more twists and turns than the West Edmonton Mall’s Mindbender. Hang on to your hat for Hang Down Your Head.  It’s Janice MacDonald at the top of her game.”
—Suzanne North, author of the Phoebe Fairfax mystery series

“The Edmonton Folk Music Festival, the city itself and the fascinating politics of funding research in the arts lend a rich texture to this engaging mystery with the twisty end.”
—Mary Jane Maffini, author of The Busy Woman’s Guide to Murder

“In Hang Down Your Head,  MacDonald does a great job of playing tour guide to the reader, as she takes us through the streets, the parks, and the university in Edmonton. Her writing is witty and descriptive. The mystery is intricate and well-plotted. You can actually feel yourself as being part of the Edmonton Folk Festival, that is, if you’re not too busy scouring the crowd for a murderer.”
—Linda Wiken, Mystery Maven Canada

“Similar in style to books by Marianne MacDonald or Gail Bowen — both fellow Canadians. In fact, Janice MacDonald does for Edmonton what Gail Bowen did for Regina, Saskatchewan. She rejects the frozen north stereotype by showing the ‘City of Festivals’ in all its lazy summer glory.”
—Merrill Young, Reviewing the Evidence mystery blog

“What’s special about Hang Down Your Head  is the obvious expertise and care author Janice MacDonald puts into the back story — the folk music legacy that is part of our Canadian fabric.”
—Don Graves, The Hamilton Spectator

Hang Down Your Head  is “a testament to MacDonald’s love of Edmonton’s folk festival and the music it celebrates.”
—The Edmonton Journal

“A murder mystery set in Edmonton, with the folkwaysAlive! Centre and the Edmonton Folk Festival as its two main sites of action. Who would think to write a mystery set here? Janice MacDonald, former University of Alberta lecturer in English and avid folkie, writes compellingly about her hometown… MacDonald captures the spirit and idiosyncrasies of folk festival culture perfectly [and her] balance between amused observation and enthusiastic participation will remind any ethnomusicologist of why we are drawn to our field.”
—Gillian Turnbull, Journal of the Canadian Society for Traditional Music

“I have been a performer at the Edmonton Folk Festival for 20 years. I always knew there were a lot of characters there, but until reading Janice’s book, I never thought of the festival itself as a character, and a fine place for a murder mystery!”
—James Keelaghan, Canadian folk music veteran 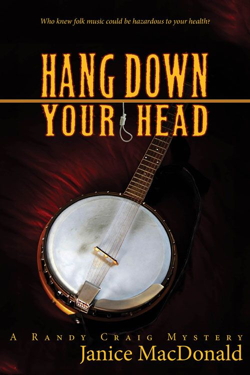