The Eye of the Beholder

A 2018 release, The Eye of the Beholder takes reluctant sleuth and sessional university lecturer Miranda “Randy” Craig from Mexico’s Pacific coast to Edmonton’s vibrant visual art scene while retaining the trademark suspense and humour that have made the series so popular with lovers of academic mystery.

Randy and Steve have finally tied the knot. With the snow blowing and temperatures dipping well below zero they are looking for an escape from the frigid Edmonton winter. Like so many others, they head south to Puerto Vallarta, Jalísco, Mexico, along with a crush of University of Alberta students, looking for a good time during spring break. When a student is found dead in an elaborately staged scene, Randy’s romantic beach walks and candlelit dinners will have to wait. Instead Randy and Steve will have find meaning in the murder to catch the culprit. If they don’t, the honeymoon just might be over.

Praise for The Eye of the Beholder:

“A smart, sophisticated and engrossing murder mystery told with lavish details and an appealing dry wit. Randy Craig is the character you want to invite to your next dinner party. Her amateur sleuthing is peppered with smart cultural references and her humour keeps the narration flowing. She’ll bring Steve, of course. The honeymooning couple’s banter is both warm and mature, providing a sharp contrast to the murders and the dangerously clever climax.”
—Carmen Amato, author of the Detective Emilia Cruz mystery series

“MacDonald is clever in creating a murder scene with symbols and clues that are obscure but not too obscure for an intelligent sleuth using her skills to unravel them. I thought it brilliant how MacDonald uses Randy’s talents as an academic researcher…to study and research and reflect in the investigation. The writing has a lyrical quality and the plot was the strongest of the three books in the series I have read.”
—Bill Selnes, Mysteries and More  crime-fiction blog

“Randy Craig’s Mexican honeymoon starts with deceptive calm and relaxation, but when a tourist from Alberta is found dead, Randy and Steve are drawn in despite themselves — into a plot that mixes Frida Kahlo-inspired art with murder-most-foul. Rumour has it that this may be the last Randy Craig mystery. Say it isn’t so! But if it is, it’s a wonderful way to cap this charming series. I have read them all and enjoyed them, but this and one other are my favourites to date.”
—Candas Jane Dorsey, Prix Aurora Award-winning author of Black Wine

“Randy Craig finds herself embroiled in a murder mystery while on her honeymoon in Puerto Vallarta. That’s only the beginning, and we’re soon swept up in the heady world of visual art and artists, both in Mexico and back home in Edmonton. The Eye of the Beholder  is the best in the Randy Craig series… but indulge yourself and get all the books. You’ll be glad you did!”
—Laurel Deedrick-Mayne, award-winning author of A Wake for the Dreamland

“Janice MacDonald populates academe with real characters and puts the humanity back into the Humanities. Of course, she picks one or two of them off now and then, which is all right with me, too.”
—W.P. Kinsella, author of Shoeless Joe and Butterfly Winter

“Edmonton’s Janice MacDonald is the most literary of the new gang of Canadian fictional murderers.”
—SubTerrain

“Janice MacDonald does for Edmonton what Gail Bowen did for Regina, Saskatchewan. She rejects the frozen north stereotype by showing the ‘City of Festivals’ in all its glory.”
—Reviewing the Evidence mystery blog 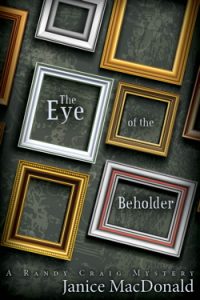